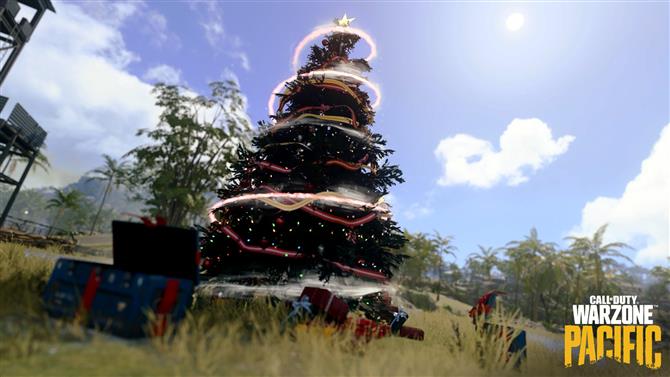 Call of Duty: Warzone Festive Fervor is coming to town this week, with new prizes and perils to discover across Caldera.

The holiday event is set to officially begin in Call of Duty: Warzone after an update goes live on December 16 at 9 pm PST / December 17 at midnight EST / December 17 at 5 am GMT. The seasonal event will bring in a new set of challenges to complete across both games: completing all of either set will get you an epic LMG blueprint as well as individual rewards for each challenge such as cosmetics and battle pass tier skips.

Caldera will be decorated with festive fir trees throughout the event, which will be denoted on the map with a special icon. Squads that stay close to the tree for a short amount of time will be rewarded with instant spawns of several supply boxes, including holiday crates which may contain legendary items or other limited-time rewards. They also may contain coal.

If you receive a lump of coal from a crate, your woes won’t end there: Krampus will stalk both Caldera and Rebirth Island, and though his target is randomly chosen every three minutes, he’ll be more likely to select victims with coal in their pockets. The good news is that your squad will be granted a „special permanent reward“ if you manage to take him out first.

Even if you don’t spot Krampus, you may hear jeers from gnomes scattered around Caldera and Rebirth island; take out the little gnomes and you’ll get rewards including double XP tokens and calling cards. If you’re in the mood to buy yourself some presents, you’ll also find new bundles and deals on a bunch of existing ones to pick up in the store.

I got a BA in journalism from Central Michigan University – though the best education I received there was from CM Life, its student-run newspaper. Long before that, I started pursuing my degree in video games by bugging my older brother to let me play Zelda on the Super Nintendo. I’ve previously been a news intern for GameSpot, a news writer for CVG, and now I’m a staff writer here at GamesRadar.